Suspension is a flexible component which connects a car's body to its wheels. because of its flexibility, suspension components soften out bumps in the road and make the truck's ride smoother.

Coilover springs (standing for 'coil-over-oil') are extremely simple to model in RoR, since the game's shocks simulate them directly.

Things to keep in mind: 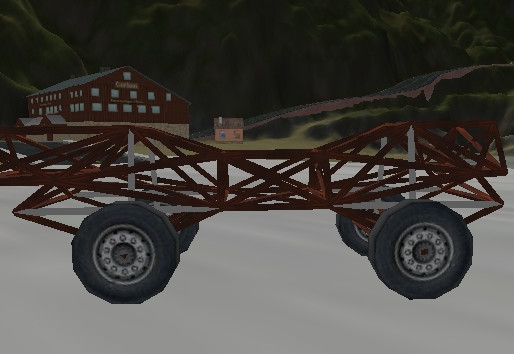 Leaf spring suspension is a very simple (in real life; it is much harder to model in RoR) and efficient design found on almost all trucks using beam axles. The design consists of a spring and a shackle, the spring is a long metal arc that bend when a force is exerted on the spring. One end of the spring is securely mounted to the frame and the other to a shackle. The shackle allows for one end of the spring to move back and forth as the spring straightens out under force.

The wheels of each axle are securely connected to each other using non independent suspension systems. The force from every bump that a wheel on one side goes over is transmitted into the other wheel too. These systems do not tend produce very good handling, and therefore are not often used on sports cars. Non independent suspension is much more commonly found on heavy duty vehicles, where the link between the wheels makes axles much stronger

Beam axles are an extremely simple form of suspension, almost always seen on the back axles of vans and semi trailers. The wheels are directly attached to the axles, and cannot change their angle to it.

The easiest way to create a beam axle is to use Axle Rigidity nodes.

The lateral location of a beam axle can be controlled in a number of ways; the easiest way in RoR simply to weakly truss the two arms that hold the axle, but this is generally not possible in real life and limits how much the axle can roll.

Example truck using a beam axle on the rear, with simple truss for lateral location. 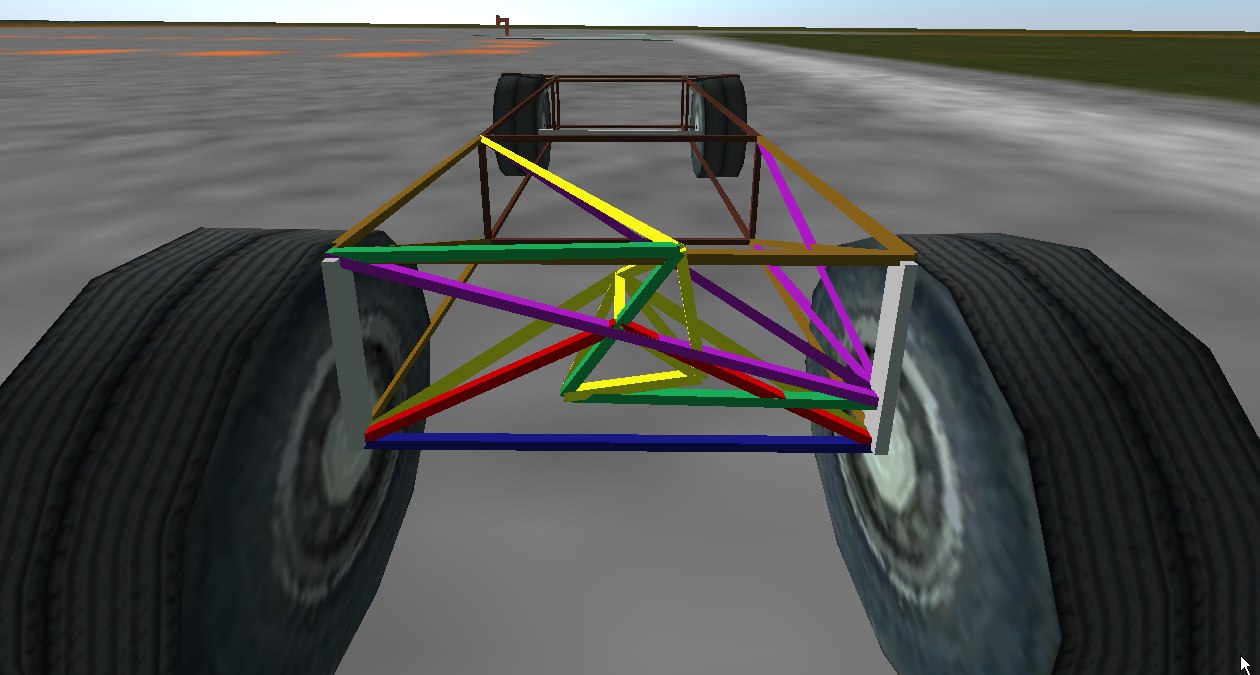 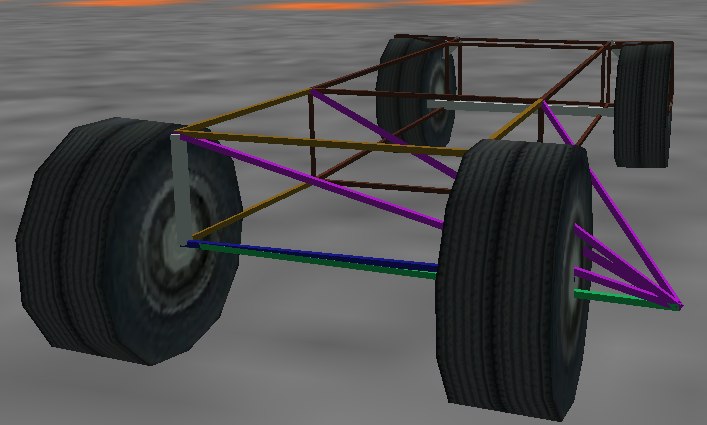 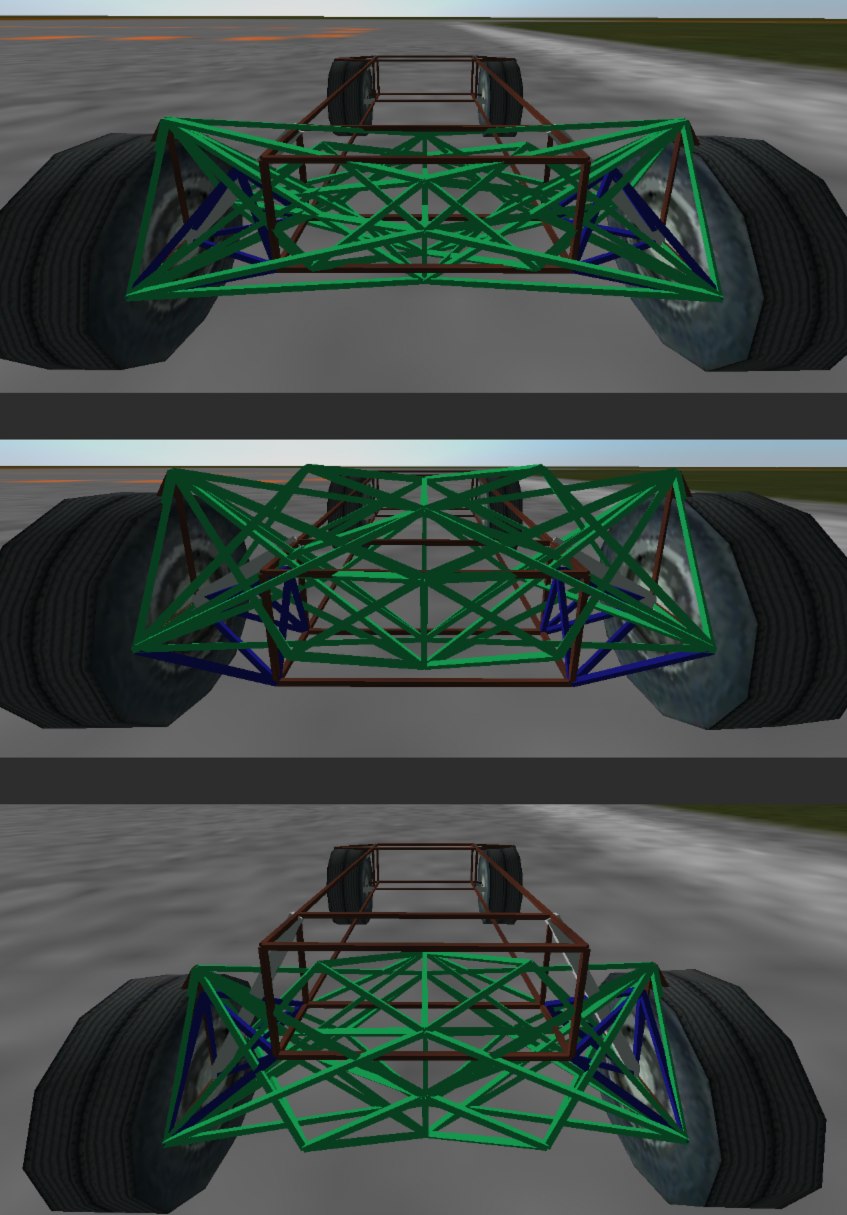 De Dion tube suspension is a relatively complex form of suspension, which falls in between the categories of independent and non independent suspension: The wheels are directly connected to each other using a sliding tube, forcing them to stay parallel to each other, but this tube is not connected to any other part of the vehicle. each wheel is actually held to the truck by a single A-arm

Due to their complexity, De Dion tubes are uncommon on modern vehicles.

An example truck using a de Dion tube on the rear. Since a telescoping tube cannot be directly modeled in RoR, a Sarrus Linkage has been used instead. It provides exactly the same effect. 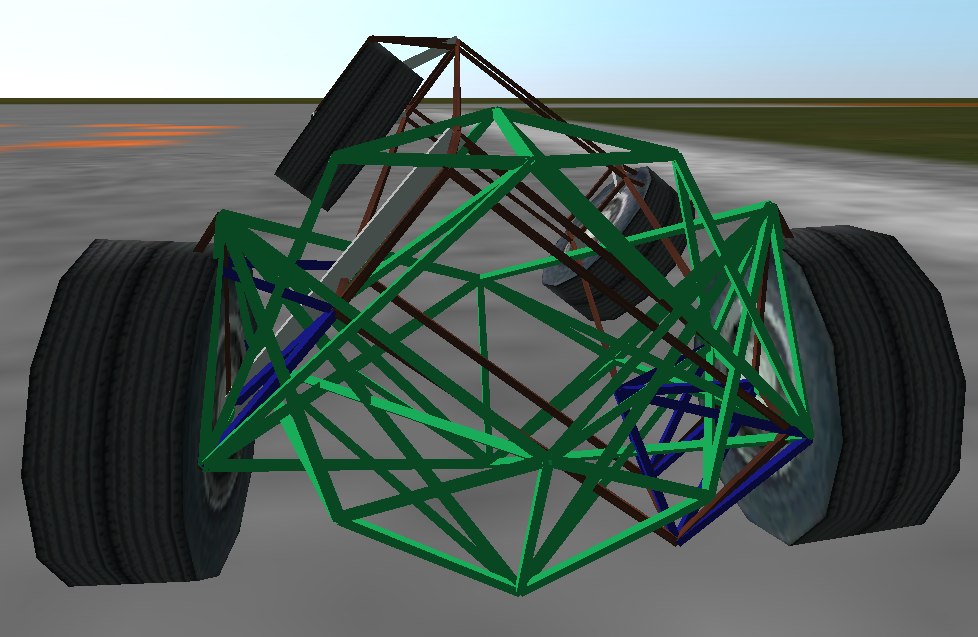 The wheels connected to the tube are kept parallel, regardless of body roll or suspension travel on either side... The tube's length can change. 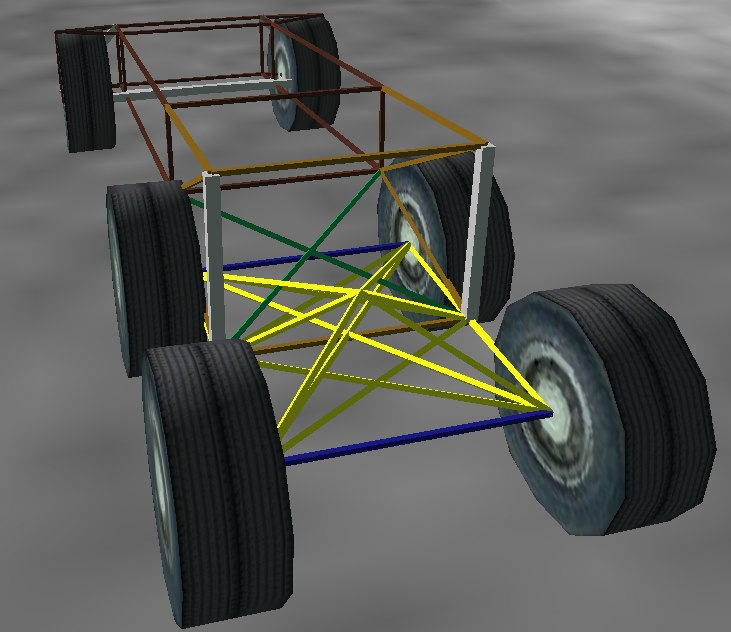 Walking beam is a special form of suspension: It solidly links two axles together, meaning that all four wheels on those axles must move in unison. Indeed, the setup is know as walking beam due to the way that trucks are see to 'walk' over obstacles. This design allows the tires to conform to the landscape, evening out the pressure on each tire. 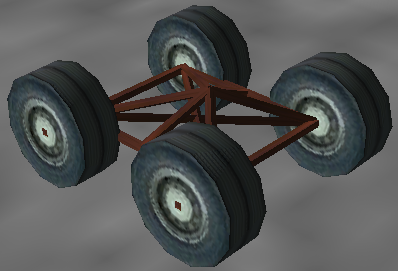 The bogie that holds the truck's four back wheels together. 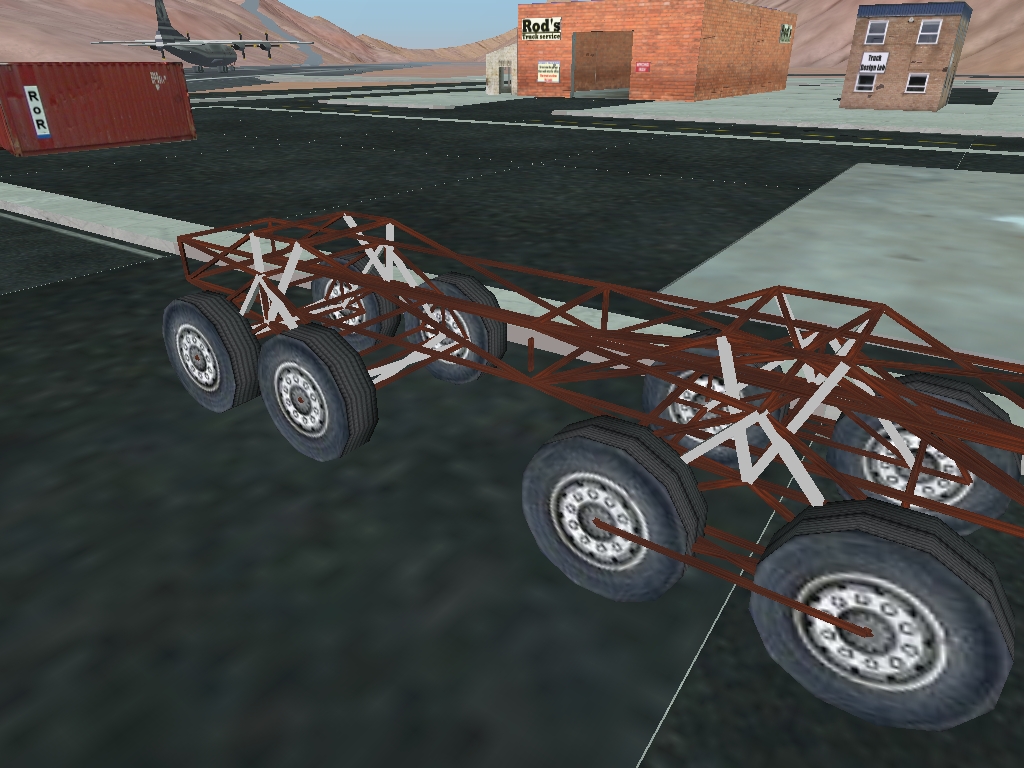 A concept vehicle in game. 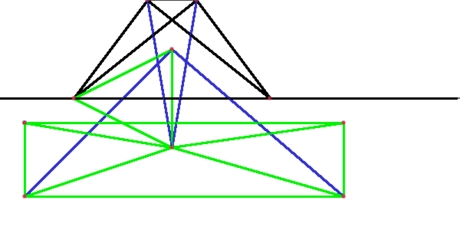 There are no significant connections between wheels in independent suspension setups. They are therefore much more suited to vehicles where roadholding is especially important. 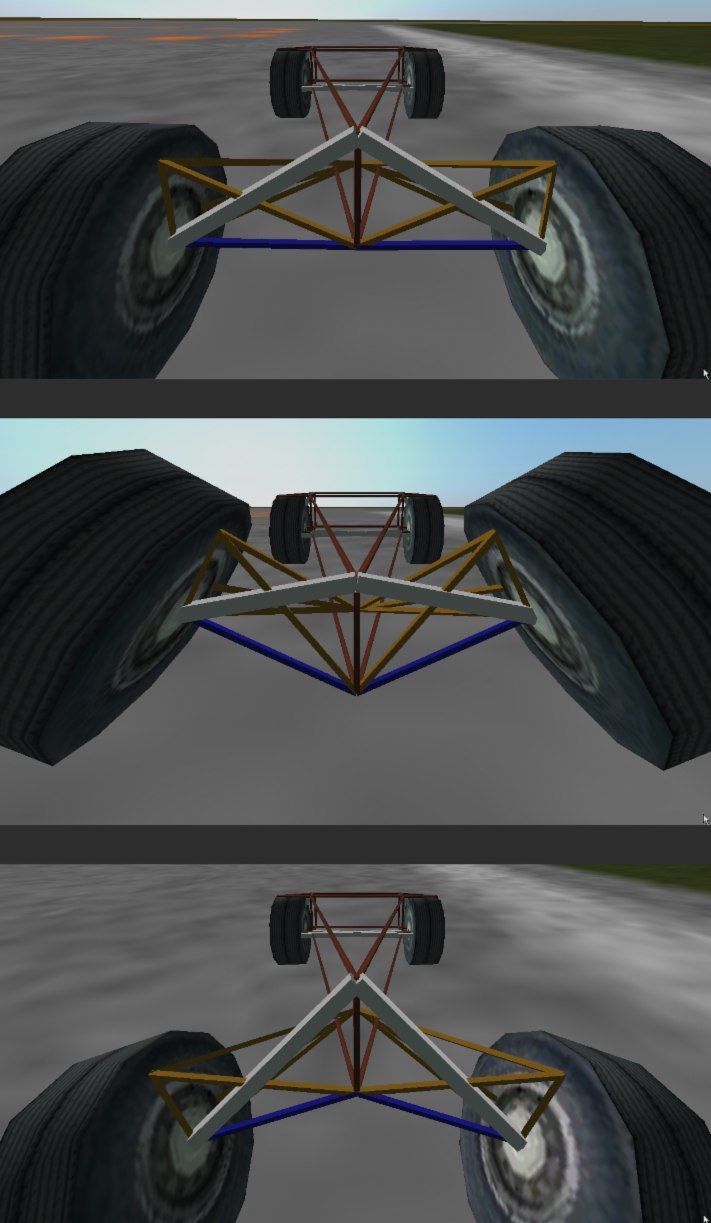 The swing axle is a small step up from the beam axle. Although it is the most common form of suspension on Pricorde's trucks, it probably produces the worst handling vehicles in the game, due to the way the camber changes when going over bumps.

Because of its strange handling characteristics, swing axle suspension is uncommon in modern trucks.

An example truck using swing axles on the rear. The axles on this truck are quite short, which encourages the inside wheel to tuck under when cornering.

Double wishbone suspension is most common in racing cars and larger passenger cars. The wheels are kept perpendicular to the road through the use of two A-arms, one above the other. It is relatively easy to tune for handling.

By far and away the most common form of front suspension for passenger cars, the spring/shock assembly must not only provide suspension to the wheel, but hold it in place, keeping the wheel aligned to the shock at all times. This requires the use of some sort of straight line mechanism with the shock

An old-style example truck using McPherson strut suspension on the front. The straight line mechanism has been hidden on the right hand side to provide a better view of the overall setup. 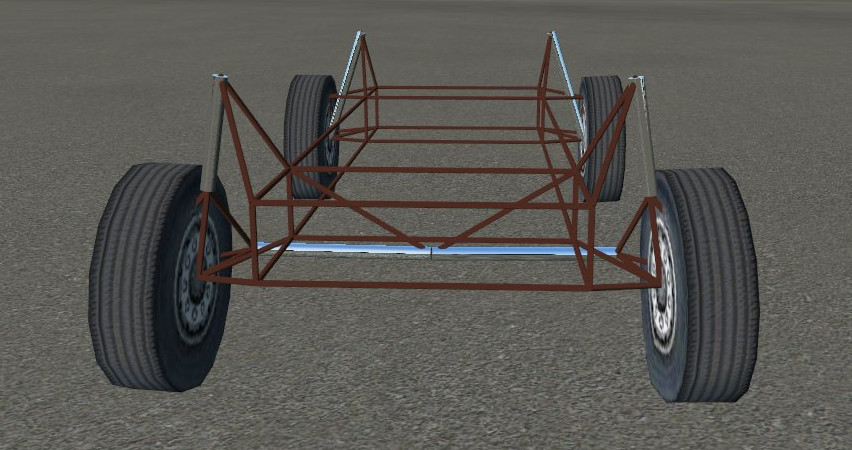 An example truck using slidenodes to keep the beam count down. No beams in the suspension mechanism have been hidden, the shocks are hold in line with slidenodes. 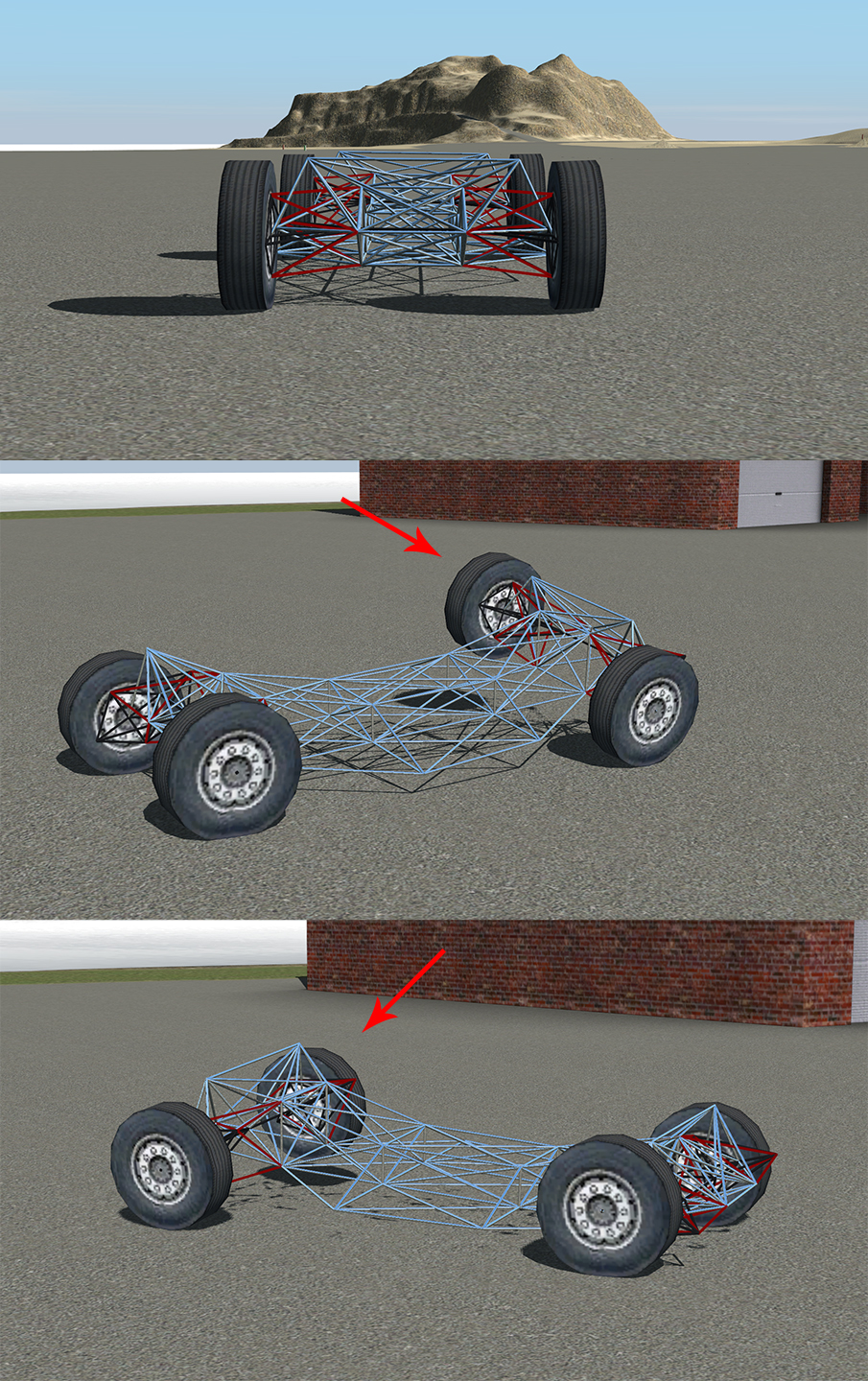 A torsion bar is a simple form of independent suspension that uses a flexible rod to provide spring force instead of a coil spring. It can be found on many vehicles from the VW beetle, to light trucks and SUVs, or even trailers.

An example truck using torsion bar suspension front and rear. You will notice the wheels tend to gain camber while cornering like swing arm suspension, however since the pivot point is perpendicular to the wheels, they will not fold under the chassis like a swing arm.

Other forms of independent suspension¶ 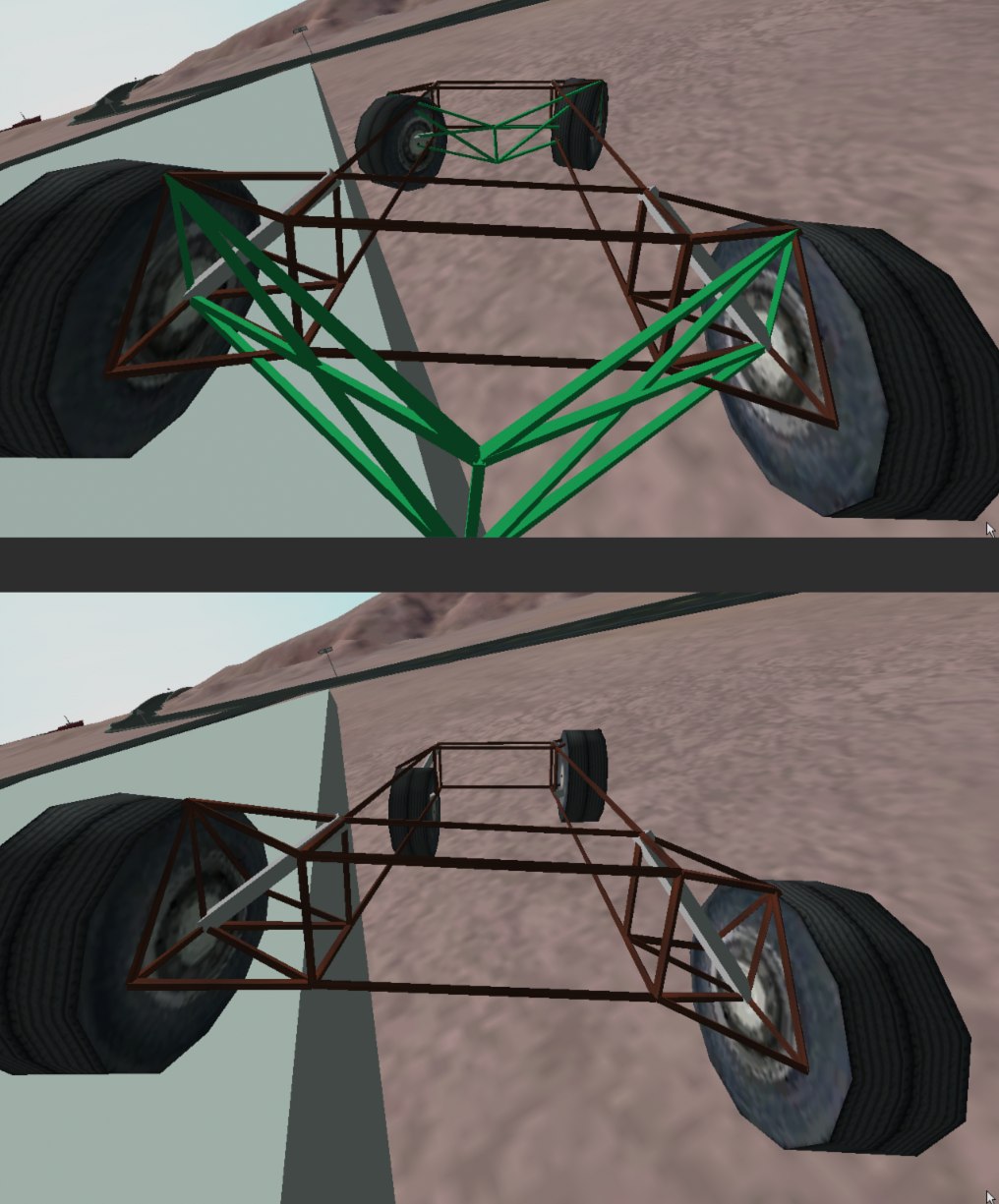 Anti roll bars are stiff beams which run across vehicle axles to lessen body roll when cornering. This makes vehicles hold the road much better when cornering.

The setup of anti roll bars differs slightly depending on the type of suspension they are being fitted to. In all cases, they must pivot on the truck body itself, but with suspension setups that use transverse A-arms, such as double-wishbone or swing arm, care must be taken to allow for left-right movement in each wheel. If this is not done the suspension will lock up during travel.

Liftable axles have been implemented in a couple of ways in RoR. 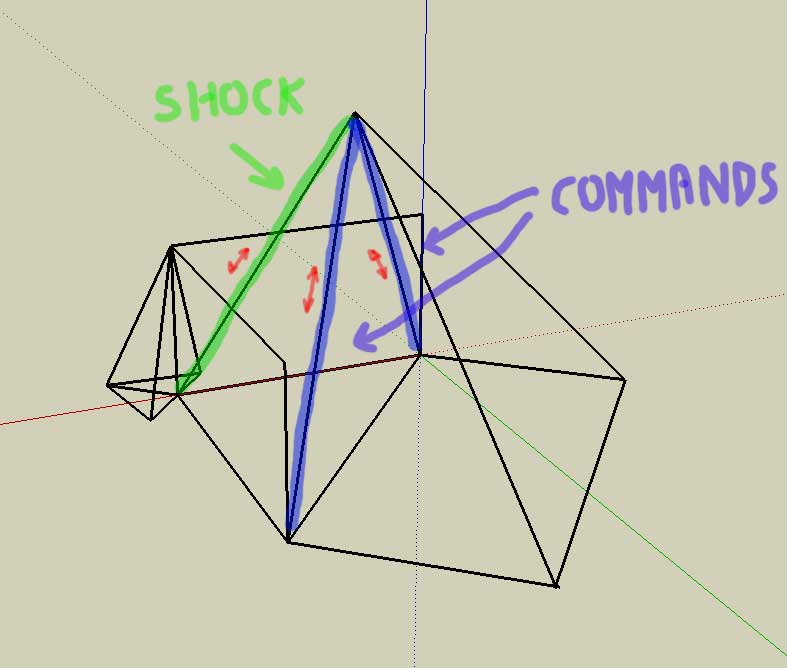 Creating a basic liftable axle is as easy as replacing part of the supporting beams with commands. Note that if your commands are too long/too short, your shocks will break. In the picture above, the commands lift the node that the shock is attached to, effectively moving the axle. 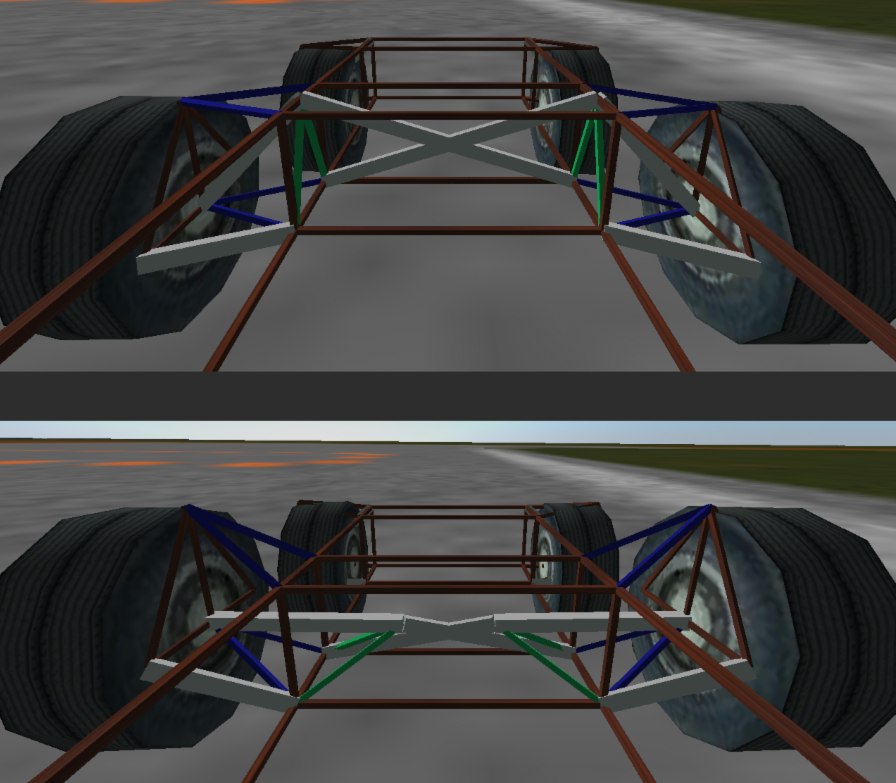