Rigs of Rods (RoR) is not your typical vehicle simulator. Other vehicle simulators use fake suspension, mesh-based vehicles with no mass distribution, predetermined damage from collisions, and approximated fuzzy-dice sway models.

Rigs of Rods uses a very unique way to simulate a truck. In fact, it does not simulates a truck at all... It only simulates a set of points, called Nodes interconnected by Beams. Assembling these elements to form the structure of a truck makes a truck. But you could also assemble them to do a car, a bike, a giant robot, a boat, a plane, a building, a bridge, anything, and it would be simulated the same way.

To grasp the idea, take a look at these games that use the same construction logic:

To build a truck in Rigs of rods, you need to design a structural chassis composed of a lattice of rods. You have to define :

Also, if you want to "dress" the chassis with a texture, you can "fill" any node triangle with a polygon (like the panels in geomag, but in RoR they deform like if they were made of rubber). This is what the submesh section if for.

One important thing is that the interconnection of beams to nodes uses what is known as a ball joint. That means that no force opposes a change of angles between two beams connected to the same node. It may sound abstract, but in practice you will immediately see the result : anything that is not triangulated will fold. To design rigid bodies you must have triangles everywhere, in any direction. So for example, if you have a cubic structure, you must add diagonal rods in all the faces. If you let a square somewhere it will fold, or it will be a soft zone (it will stay rigid because of other parts of the geometry, adding strains to this part). 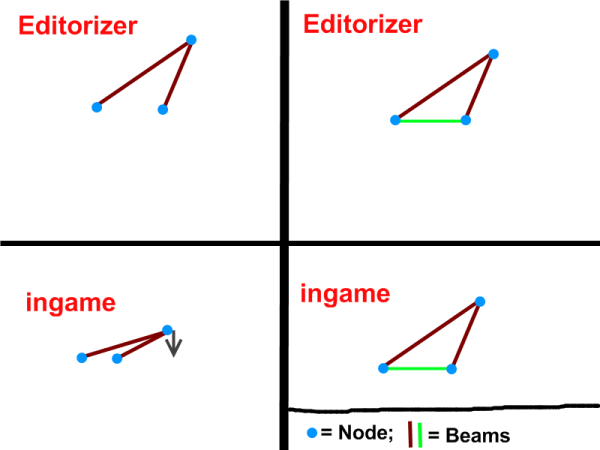 Why did we chose ball joints? Because: